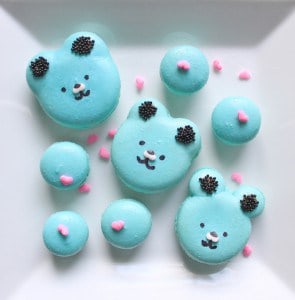 Do all the bears on the left look the same to you? Sure, at first glance, they all seem to look cute and cuddly but if you look closely you can see that the one on the bottom right has more clearly defined ears. I did this piping sample to show the difference between batter that was piped at different stages. For more clearly defined features, always pipe one element at a time, wait for it to dry up a little and then pipe the next element.

For the macaron bear on the bottom right, I piped all the round heads first. Once I had finished piping all the heads and they had time to dry up a little, I then piped the ears. Piping the two different elements in stages allowed for each element to stay relatively independent of each other. In contrast, the head and ears of the other two bears were piped continuously with  no resting time in between elements, resulting in the ears merging with the head. 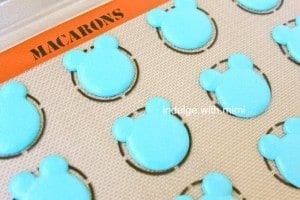 Neither one is right nor wrong. It really depends on the look you're trying to achieve. But if your goal is to pipe a creation with distinct parts, it's important for you to plan each step and allow proper "drying" or "resting" time at each stage.

I hope that helps you resolve some of the frustrations you may be having with piping your own #MacaronArt. I've done a few more baking projects lately include a purple Angry Bird Pig. Come by my Instagram to check it out and leave me a message when you have a chance. I'd love to talk Macarons with y'all!

« Froggies in the Marsh Weeds
Afternoon Tea at Neverland »