Last year, in my Tipsy Halloween Tea post, I told you about my penchant for jumping (emotionally speaking) directly from Summer to Winter. It's quite sad saying goodbye to our beloved summer season in Vancouver. The next nine months will be filled with continuous West Coast rainfall, the start of the Fall season definitely reminds me of this all too well. Nonetheless, in between our bright summer season – with sunshine from 14-16 hours a day in between May to August - and the festive winter season, there are two little fall events called Halloween and Thanksgiving that I need to get through 🙂

This year I was actually inspired to get on this Fall bandwagon a bit early. Maybe it’s that ever impatient push in our commercialized world to have Halloween themed products out on the shelves before summer BBQ equipment is even put away that had me thinking about pumpkin spice since late August.

I decided early that this year’s fall project would be a recipe for a Pumpkin Spice Cheesecake Macaron. Sure, there were a few other recipes out there already with variations of pumpkin, spice and or cheesecake but I wanted to create one that didn’t involve mixing cream cheese with powdered sugar (too sweet). It also had to have a substantial pumpkin flavour on top of the pumpkin spice since the spice alone tastes quite like gingerbread.

So for this recipe, I've infused the shells with pumpkin spice to give it that extra flavour. The macaron filling consists of a cream cheese frosting made with a meringue buttercream instead of American buttercream which contains powdered sugar. A ring of this cheesecake frosting is piped on the outside to create a dam and the inside is filled with a dollop of pumpkin spice curd.

One of the challenges of working with cream cheese is that it can separate if over beaten. You’ll see that the mixture will become curdled, sweaty and very lumpy. One of the extra steps taken to combat this is to cream and soften the cream cheese ahead of time so that it can be easily incorporated into the buttercream without the need for much more beating.

How to Fix a Curdled Cream Cheese Frosting

Now let's just say, despite all your best efforts to prevent the cream cheese frosting from separating, it does. You'll see that the mixture will become broken, sweaty and lumpy. Normally, a broken looking buttercream can usually come back together after beating some more. With the addition of the cream cheese, this doesn't happen. The water separates from the cream cheese and the more you beat it, the worse it gets. Don't throw the mixture away in frustration. I know, it will look so ugly that you might be tempted to.

To fix it, boil a pot of water and once it comes to a boil, hold the mixture (in a heat-proof boil) over the boiling water and let it heat up. Stir it gently to keep it moving. Once it has melted to an almost smooth consistency, immediately remove it off the heat. Let it cool to room temperature. ( I like to put it in the fridge for a few minutes to speed it up.) Beat it on low speed with the paddle attachment on a stand mixer. Now watch as it slowly and miraculously turns from a runny mixture into a thick and fluffy cream cheese frosting!

I hope you enjoyed reading a little bit of the thought and journey that went into creating this recipe. Recipe development for me takes days and multiple test batches because I like to work from scratch, I'm always excited to share the end result with all of you. Print out this recipe, try your hand at it and let me know how it goes.

Thanks so much for reading. Oh, I've also included a special pumpkin macaron template for you all to download too. See below.

3. Use block cream cheese, not the type that comes in a tub.

4. If cream cheese is over beaten, the water will start to separate from it. Read the introduction in this post to learn how to fix it.

5. This is a higher moisture filling so it's best to consume it within 12-36 hours.

This information is provided as a courtesy and is an estimate only. This information comes from online calculators. Although indulgewithmimi.com attempts to provide accurate nutritional information, these figures are only estimates. 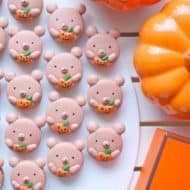 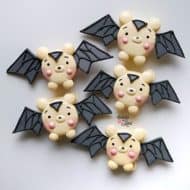 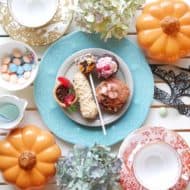 Previous Post: « My Night at My Shanti for a 5 Course Northern Divine Sturgeon Dinner
Next Post: Game On Afternoon Tea & Tipsy Tea at Notch8 in Fairmont Vancouver »