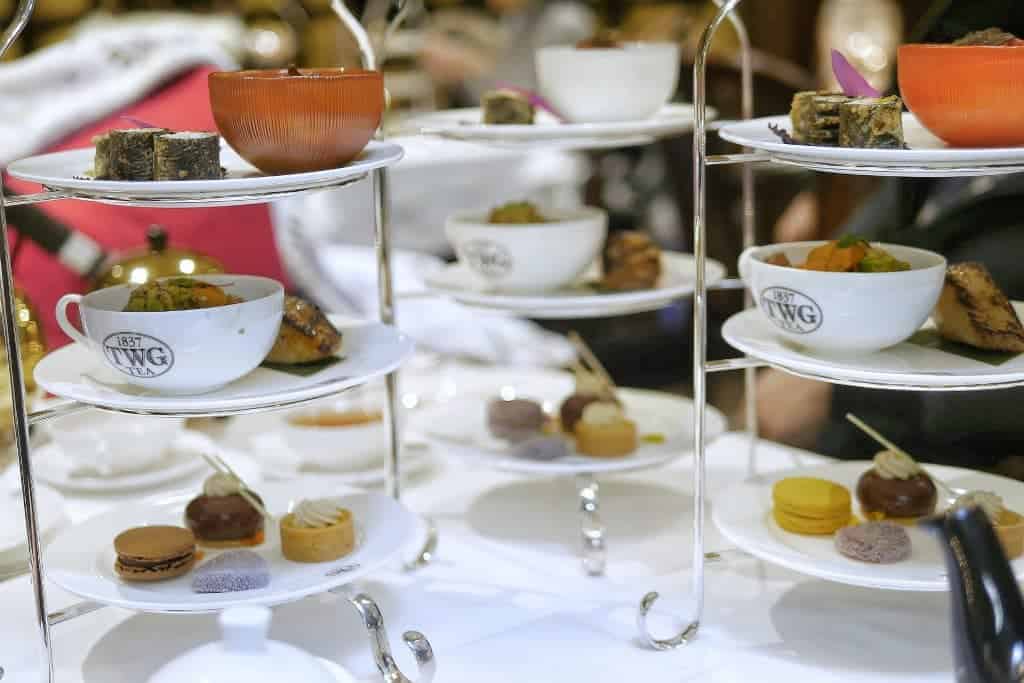 Vancouver's newest tea salon is the much anticipated TWG Tea on Georgia Street. TWG, short for The Wellbeing Group, is an established player in the tea industry with over 800 different types of teas in it's collection. Started in 2008 in Singapore, the company not only sells tea but also serves tea infused food in it's luxurious tea salons 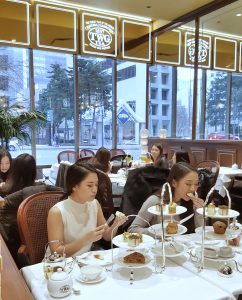 Their new location in Vancouver is housed in the former Urban Tea Merchant space. Newly renovated, the space inside is fresher and more opulent than before. There's a large array of teas and related gifts for sale in the gift shop on the lower level.

This newcomer takes great pride in their position as a luxury tea salon, as evidenced in the staff training and exquisite ingredients used in each dish. Lending even more support to it's position as a serious contender in the afternoon tea market are their huge selection of over 300 tea varieties and the kitchen's ability to serve an extensive range of tea sets at all different price ranges. There are just so many combinations of tea sets, individual entrees and tea varieties that it can get overwhelming but don't worry, the knowledgeable staff will be more than happy to give recommendations. I was impressed when I asked my server about a specific tea blend called the Macaron Noir (of course I had to pick that one!) and she was able to tell me what it tasted like . And when it came, she was right. The black tea is sweet and chocolate-y without being fruity. 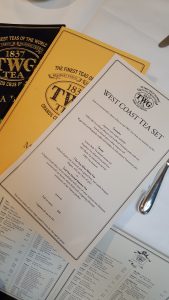 Before our visit, a few of my friends had already tried their regular tea sets and everyone remarked on how small they were so my girlfriends and I were prepared to order an entree as well. When we sat down, we were presented with a menu for a new tea set called the West Coast Tea Set which, we were told, was just introduced on Wednesday. Looking for something novel, we decided on this set. It had four sweets and four savouries and I found it to be on the small side as well. So yes, be prepared to order additional menu items.

We had a fun afternoon chatting about life, random girl stuff and my girlfriends' new baby.  The seating on the upper level is especially lovely since the area is quieter with less tables. You're also shielded from the hustle and bustle of the gift shop and new guest arrivals on the main floor.

If you're a tea connoisseur, this is definitely the tea salon for you. 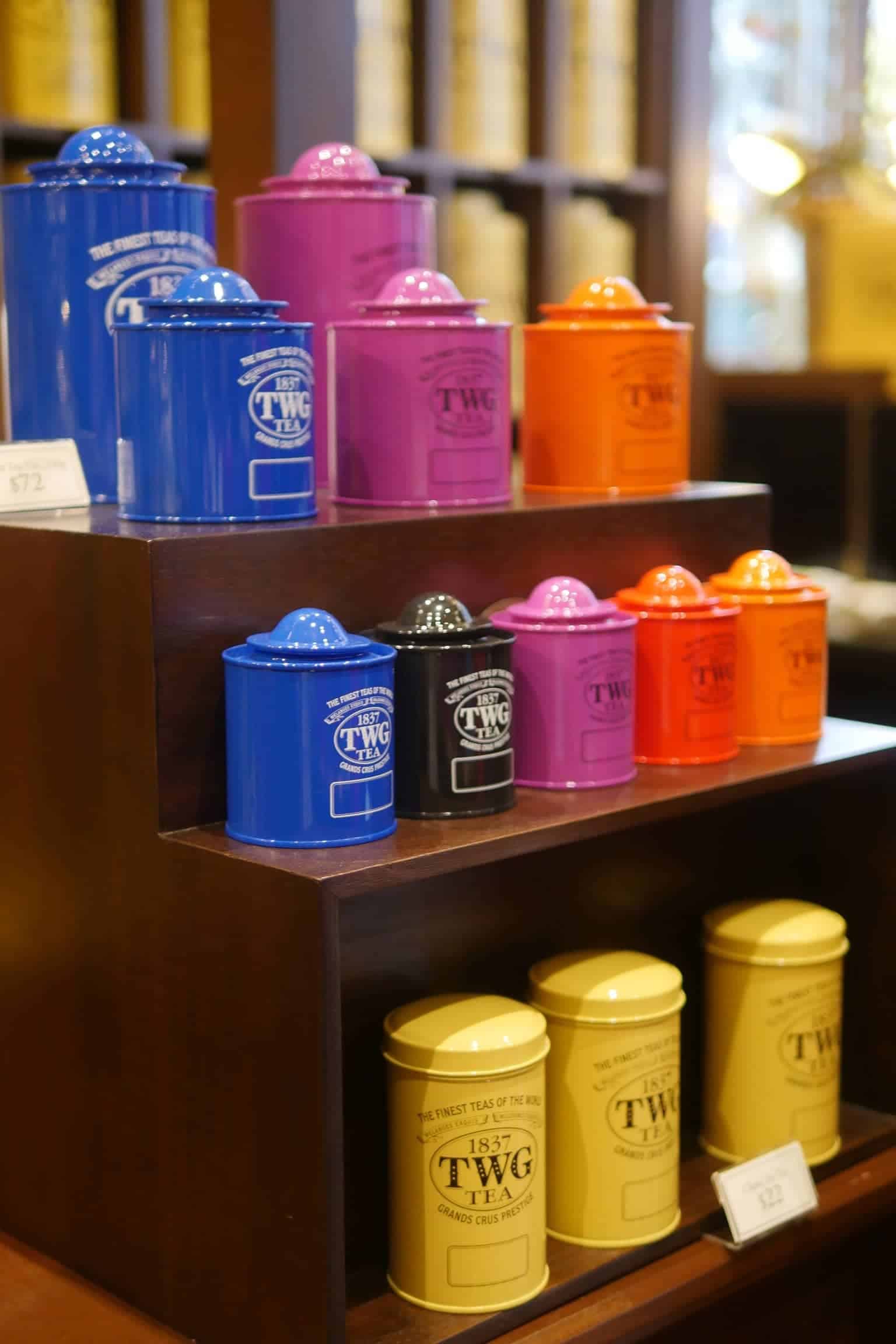 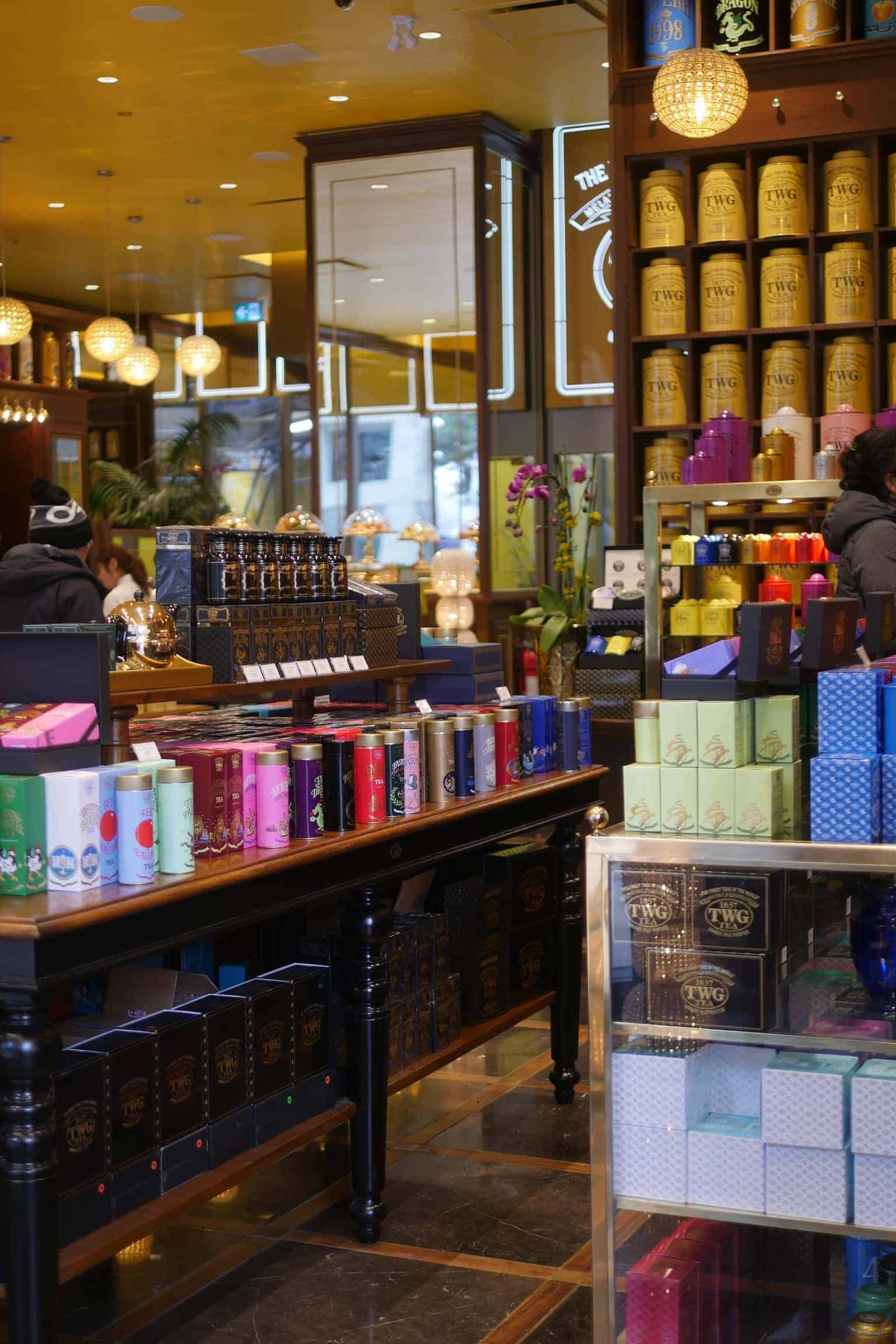 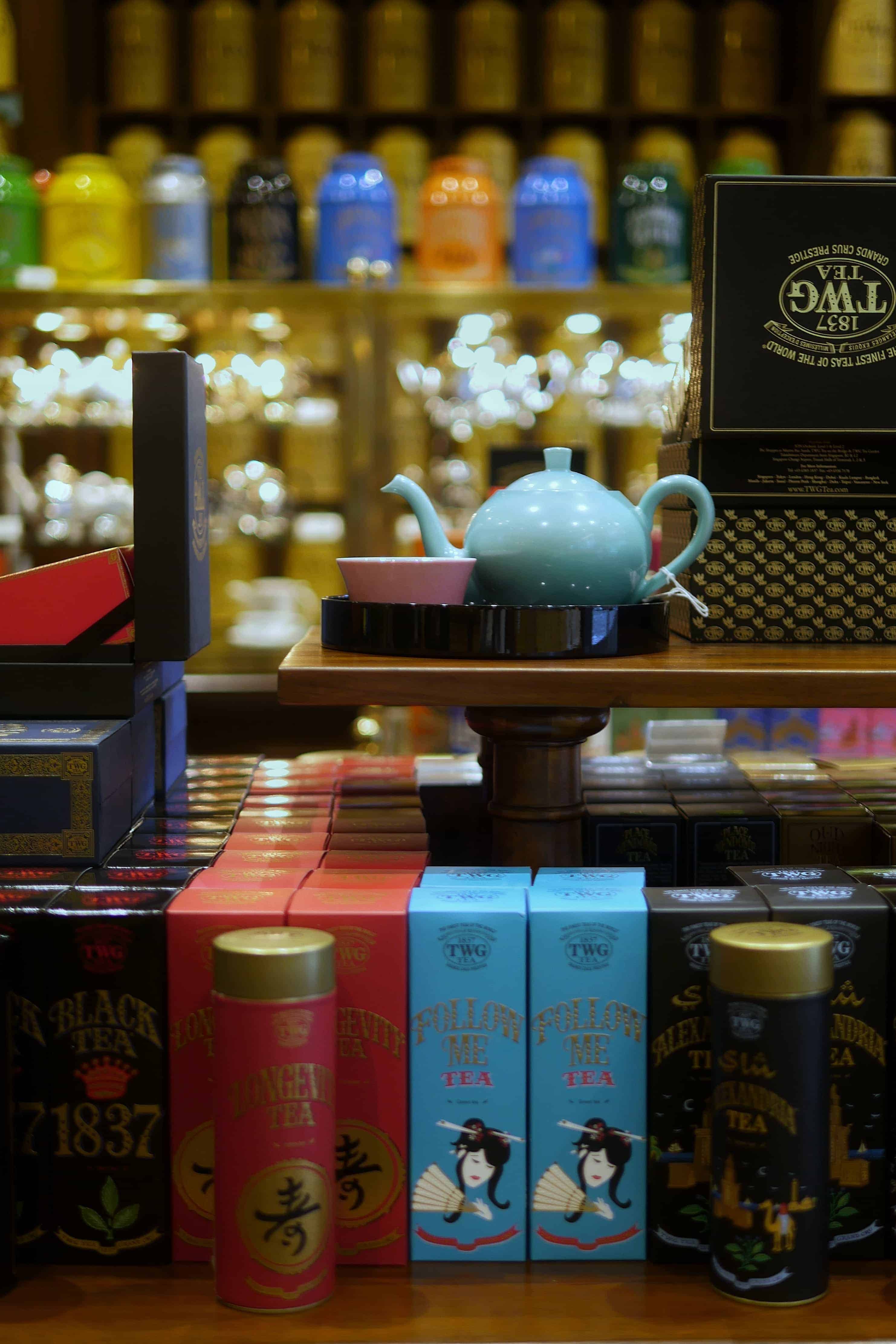 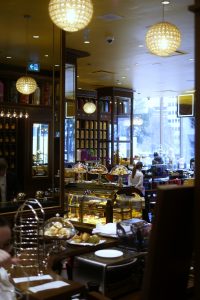 Ambience: Classic opulence on the inside. Dark wood furniture, velvety soft covered dining chairs, white table cloths, hanging pendant lamps. The space is on the small side with 2 levels. The two levels are separated by a ramp with a slight incline. The lower level has approximately eight tables seating 2-6 people, depending on the configuration. The upper level has approximately 4 tables, seating 4-6 people, depending on the configuration. Seating is a bit cramped.  There is a very limited amount of window tables and not a lot of sunshine comes through since there is an awning and downtown Vancouver is a concrete jungle. However, the space is adequately lit due to the thoughtful placement of spot and flood lighting.

Savoury: Very delightful savoury menu. Although the items were on the smaller side and there were only a few of them, the ingredients used were thoughtful and luxurious while the presentation was beautiful. The server's pouring of the broth into the Wagyu Beef pho is a nice touch that adds a little theatrics to your tea experience. The sable fish also stood out for being as perfect as sable fish usually is when it's good - buttery and silky but also perfectly seasoned with a light char.

Sweets: Although it's a West Coast tea set, the lack of a scone left us just a tiny bit disappointed. Maybe even a tiny one could have sufficed since there were only four sweet items. The macarons had a nice texture and the fillings were nicely prepared with chocolate ganaches and curds (not simple buttercream). The pate de fruit was overly sweet. 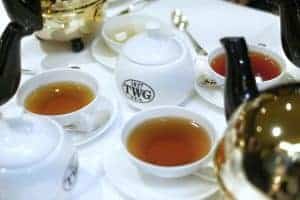 Tea: An A-mazing collection of over 300 teas which will eventually be updated to 500 at a later date. The tea menu is split into regions and by type. Even if you're not very tea-literate, you will have an easy time selecting one from your favourite region or you can ask for a recommendation which they will be able to give at the drop of a hat.

Tea Ware: All-white tea ware customized with the TWG logo which the server meticulously arranges to point the correct way (up) when laying down the dish.

Service: Fully staffed. We had one principal server along with other team members who would work together in the serving or cleaning. We were checked on constantly and never felt unattended. They were professional and well trained. 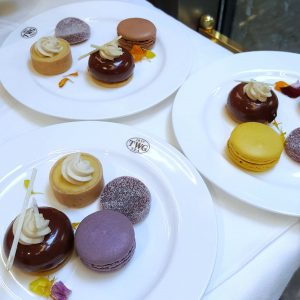 Parking: Metered Street parking available nearby but no parking in the front entrance on Georgia. There is also a sheltered parking lot on the same block. It is a 5 minute walk from the Vancouver City Centre Sky Train station.

♥ West Coast Tea Set $48/per person
(includes one pot of tea, supplement for teas over $10)
4 savouries and 4 sweets

♥ There are many other type of tea sets available at different times in the day at varying prices. (For ex, afternoon tea sets from $19-39)

♥ Reservations can be made on Opentable