A few weeks ago I took an eclair class taught by a European pastry chef. It was very informative and I learned so much on the proper way to make a good eclair. Plus it's always a good experience to be in a professional kitchen working with commercial grade kitchen equipment, especially the oven.

After the class, I started experimenting right away with making cream puffs in my home kitchen because I had just the cute character in mind that I wanted to make with the choux pastry recipe we were taught. I thought the beloved Japanese anime character, Totoro, would be a perfect character to make into cream puffs because it had an adorably big belly which was naturally round and it would allow craquelin to be place on there to define the belly area.

I made several attempts at baking Totoro with the class recipe but each time it would not look anything like him. The cream puff was exploding into different shapes and was not smooth and uniformed like the shape I had envisioned in my mind when I first piped it. The instructor had warned us about this as his recipe leaned towards the traditional composition for choux pastry. He explained that the "modern day" eclairs/cream puffs sold in gourmet patisseries now had a more consistent look to them at the expense of less rise. That made sense. My first few batches of Totoros looked great when piped but after baking, they were unruly and puffed up into every which way it wanted.

I ended up creating a new recipe which would be conducive for baking these cute Totoro characters consistently. It's the recipe which I am sharing below. Before starting, you might also want to read some of the tips on how to bake a nice cream puff.

Why Did My Cream Puff Collapse?

I found that cream puffs were much easier to bake than macarons in that there wasn't a lot of places where something could go wrong. The worst thing that could happen to a cream puff aesthetically would be a collapsed shell, leaving it flat, lifeless and hard to fill since the inside is doughy and not hollow. To prevent this, there are a few crucial steps to pay attention to:

I Want to Bring These to a Party, Can I Make Cream Puffs in Advance?

Although cream puffs are best eaten on the day it's baked, you can still make some elements needed for this recipe in advance. This will cut down the amount of work you will need to do in advance of a party or other special event. Tip #2 was told to me courtesy of our instructor who related that this was one way they were able to always have pâte à choux on hand when he worked as a pastry chef in the hotel industry. Here are some elements of choux pastry which you can make ahead of time and how to do it:

Totoro cream puffs are actually not too hard to bake and they are a real crowd-pleaser. I found that they made excellent gifts when wrapped in a small loaf pan and you only need 3 of them to make a big impact. It's a fantastic edible gift for the holiday season coming up. Give it a try and let me know how it goes!

*Cake flour can be substituted with AP flour.

*Bread flour can be substituted with AP flour but bread flour is preferable due to it's higher protein content.

*Heavy cream can be substituted with 33% whipping cream.

*This recipe requires that the oven temperature be high (preferably 400F+) in the beginning of the baking process and then lowered to slowly dry out the cream puff without burning it. This can be achieved by opening the door of the oven and/or lowering the baking temperature. Opening the door will be the quickest way if you are concerned that your cream puffs are already becoming over-baked. 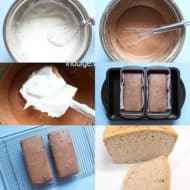 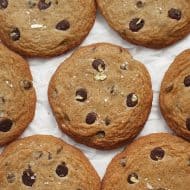 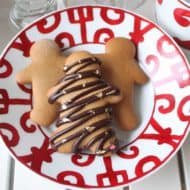 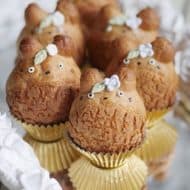 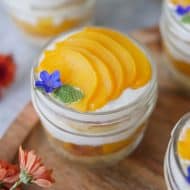 Sloppy Peach Cake in a Cup 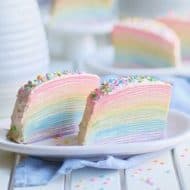