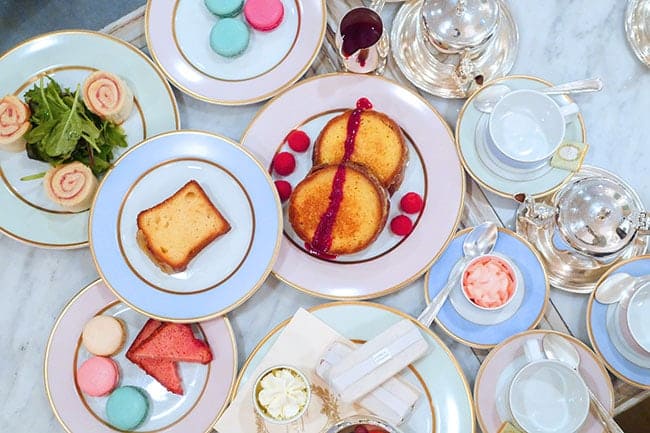 First Laduree in Canada
I used to just dream about having a Laduree in my city and had looked up various ways to order Laduree macarons in Canada. After some research I discovered that not only were there no Canadian locations whatseover, there also seemed to be no official shipping service to Canada either. 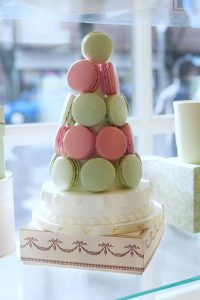 Two years ago, I happened to be travelling to Hong Kong so I was excited to have an opportunity to finally taste Laduree macarons, even if it's not in it's birthplace, Paris. Blog post here. Then not long after, I heard the wonderful news that Laduree would be opening their first Canadian location and it would be right here in Vancouver! 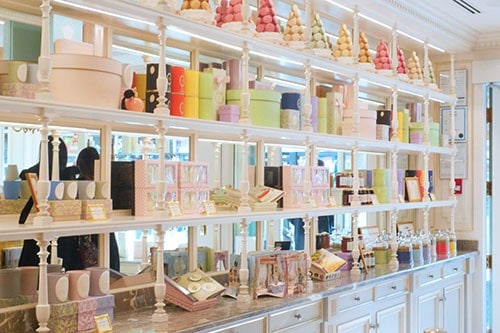 What about the crowds?
The first few weeks of Laduree's opening in Vancouver drew big crowds and line ups that were hours long. On our visit last month, a Sunday, we did not have to contend with the huge crowds. Arriving at 1 pm, we were one of the first groups in the salon. The room was slowly filled up to near full capacity midway into the day and the gift shop experienced a short burst of frenzied activity while we were there. The servers told us that the day before (a Saturday) was much busier so keep that in mind if you're trying to avoid the crowds. 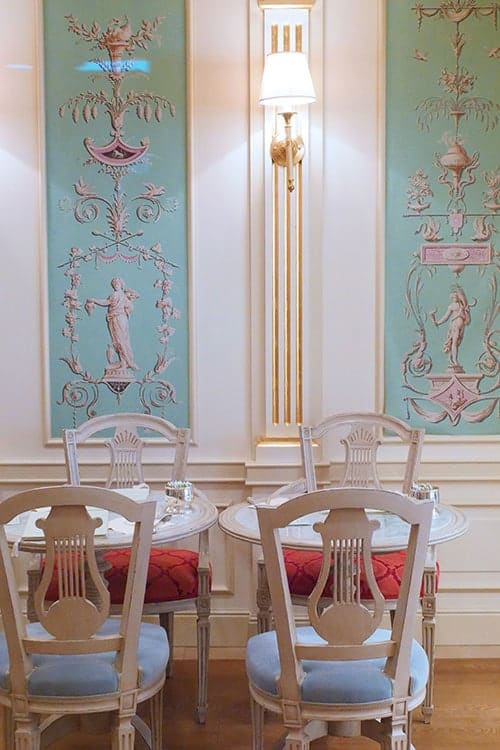 Delicious and Photogenic
The most outstanding point of our tea experience was how all the food exceeded our expectations. Besides being incredibly photogenic, it also tasted delicious. All the sweets were incredibly flavorful and had the proper consistency and texture. 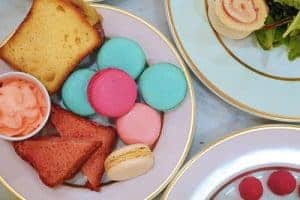 What about the macarons?
The macarons were also everything you'd imagine world famous Laduree macarons to be - a crispy egg shell like crust with a slightly chewy interior. It wasn't soggy or crispy - just right in the consistency department. The fillings were also loaded with flavour. And this is all after surviving a plane ride from France where they were originally made, flash frozened and shipped to all their locations around the globe. We were told by our server that the Vancouver location happens to receive two shipments a week. I think this is a great way to preserve a sense of consistency with their core product.

The Menu
The menu offers a respectable selection of sweets and a smaller list of savouries. There are lots of options for little sweet bites, making it easy for you to drop in for a quick pot of tea and a small treat. I know that is something I will not hesitate to do the next time I need a little break while on Robson street.

I can't say enough how much I love everything that is Laduree and this experience made an even bigger fan of me. I will be revisiting again very soon. 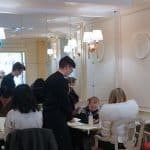 Ambience: Dreamy Parisian tea salon that's colorful, elegant and feminine without being overly cute. Floral wall papered walls, white furnishings and photogenic marble tables. There is a brightly lit gift shop that is street facing. The approximately 20 seat tea salon is located at the back and in comparison, it is a bit underwhelming due to the absence of natural light since it is windowless.

Savoury: Good. A small savoury menu consisting mainly of croque monsieurs and french toast. Unlike the macarons, the savoury items are made in house and they were well-made, delicious and beautifully plated. The french toast was my favourite item. It had a nice bouncy texture and tasted like lychee. The raspberry sauce which comes on the side added a bit of tart and sweetness which tied everything together very well. It was so flavourful even on it's own that it was still enjoyable without the raspberry sauce. The tea sandwiches were quite small and meticulously wrapped in wax paper which turned out to be a good thing since the bread remained fresh. The smoked salmon and cucumber fillings were also nicely prepared. 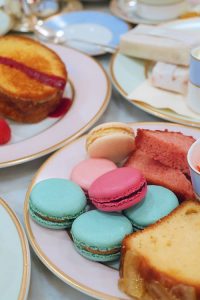 Sweets: Excellent. We were really impressed with all the sweets. They were all equally flavourful and fragrant. The cakes all had appropriate textures to their respective type. The macarons were excellent. They had an egg shell like crust and a chewy interior. The shells seemed to be a bit better than the ones I had in HK. I think the humidity there is just not kind to macarons. If I had to compare Laduree macarons from the other bakeries in the city, I would say the shell reminds me most of the ones found at Faubourg. Just to be objective, if I had to pick one "problem" with their sweets, it would be that the flavours were on the one-dimensional side. It's strong and enticing but tasted artificial.

Tea: A small collection. Teas are also available for sale as well (similar to TWG). I'm sure you're aware that their packaging is just to die for so they'll also look nice in a display case. I recommend the Marie Antoinette tea. I had the Jasmine one this time but didn't find it special enough to purchase.

Tea Ware: Perfectly photogenic teaware! It is the most inspiring set of tea ware I've encountered at afternoon tea in Vancouver. Easily recognizable, these pastel colored tea sets are used in all their salons around the world. Your camera will just beg you to capture all this goodness. 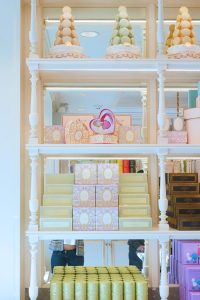 Service: Fully staffed, professional and well trained. We were checked on constantly and never felt unattended. We had one principal server along with other team members who would work together, serving or cleaning. They were all well-trained and professional but not so stuffy that they did not enjoy a few side conversations with each other when we were perusing the menu. Our main server was only two days into the job but I felt she was well trained enough to carry the day which seems to show how thorough their training must be. When the French Toast was brought out, there was a raspberry sauce pour which added a small theatrical touch.

Parking: Metered Street parking available right outside on Robson Street $6/hour. It is a 7 minute walk from the Burrad Street Skytrain Station.